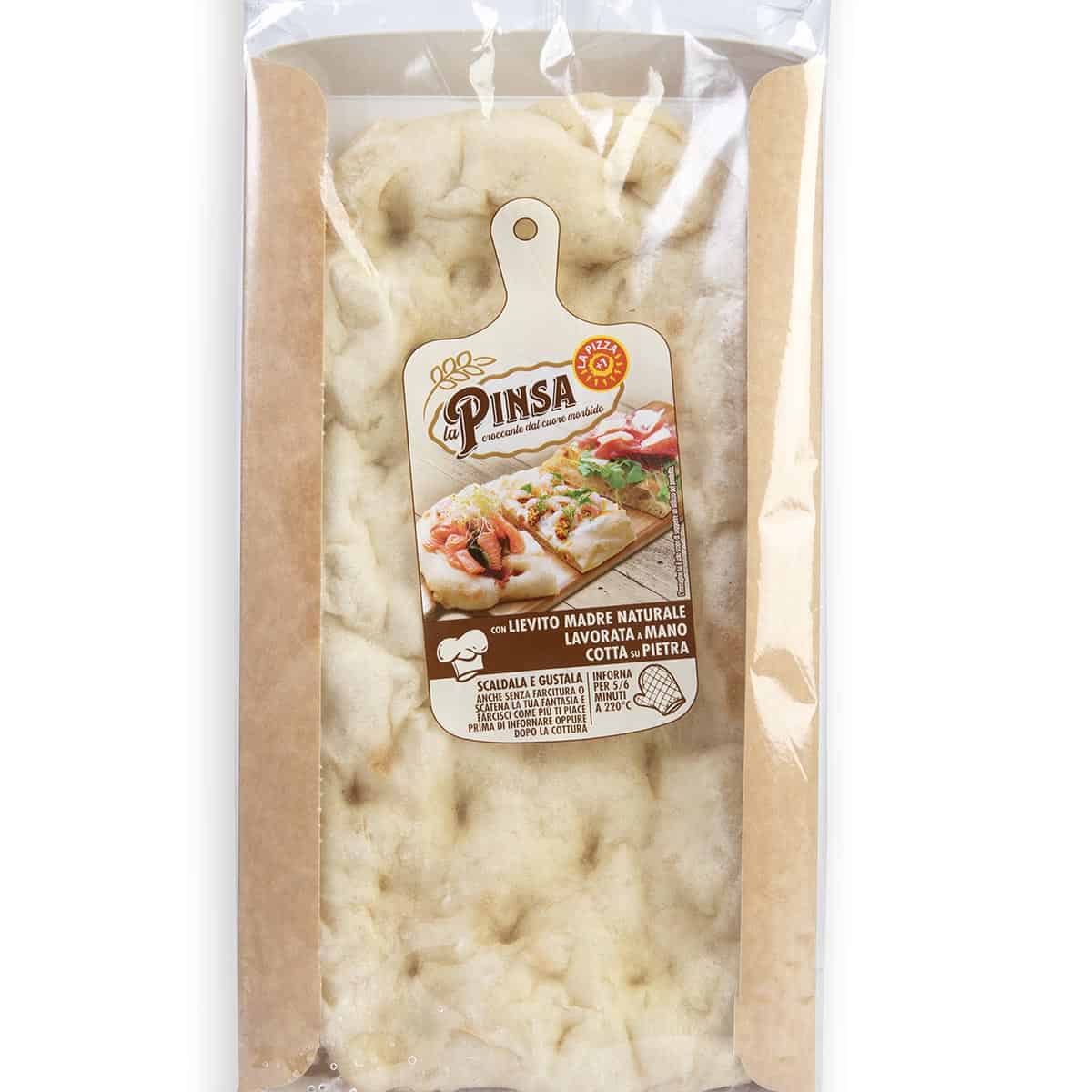 The popular Pinsa Romana pre-baked! This is a culinary product similar to traditional Pizza and leavened with natural yeast and partially cooked on stone and handmade, with extra virgin olive oil.
The pinsa has an oval shape and is made with the addition of natural yeast, to increase the leavening process.

Similar in appearance to the Pizza base or to a focaccia bread, The Pinsa has a higher percentage of water than pizza (about 80% unlike pizza, which has an amount of liquid of 60%) and less salt (which is added after the cooking unlike pizza).

The dough is full of empty areas before cooking, which makes the food light and crunchy on the outside and soft on the inside. Due to the long leavening time (between 24 and 120 hours), pinsa is easily digestible because, when consumed, no fermentation processes takes place in the stomach.

Fill your Pinsa with cured meats and mozzarella cheese, or season it like a pizza, cook it in the oven for a few minutes and it’s ready to eat!

NEED SUGGESTIONS FOR YOUR PINSA? TRY OUR RECIPE FOR THE PERFECT PINSA, CLICK HERE

Our Pinsa is super easy to make. You just add what you want and cook it for 7 minutes.

You can add Tomato sauce, cheese and Slices cold cuts or any dressing you like!

Produced in a protective atmosphere. Keep refrigerated between 0 ° C and + 4 ° C. Do not puncture the package. Once the package is opened, the product can be stored in the refrigerator for 24 hours.

It can be frozen: YES

There are no reviews yet.

There are no questions yet

Your question will be answered by a store representative or other customers.

Thank you for the question!

Your question has been received and will be answered soon. Please do not submit the same question again.

An error occurred when saving your question. Please report it to the website administrator. Additional information:

Thank you for the answer!

Your answer has been received and will be published soon. Please do not submit the same answer again.

An error occurred when saving your question. Please report it to the website administrator. Additional information:

Tortelli with ricotta and spinach 1Kg

This website uses cookies to improve your experience when browsing the site. Of these, cookies classified as necessary are stored on your browser as they are essential for the basic functionality of the website to work. We also use third party cookies to help us analyse and understand how you use this website. These cookies are only stored in your browser with your consent. You also have the possibility to opt-out of these cookies. But opting out of some of these cookies may affect your browsing experience.

SAVE & ACCEPT
Powered by